SCOTTSDALE, ARIZ. — If one logged into Scottsdale Art Auction’s (SAA) live-streamed sale on April 9 and 10, the sounds of bids being shouted from the phone bank and the hum of chatter from the salesroom floor might give one a momentary pause. In an era where live gallery bidding is the exception rather than the norm, it was sheer pleasure to witness the excitement that nothing but a live auction can deliver.

Just three months after its monumental white glove sale for the Leanin’ Tree Museum, the Scottsdale Art Auction is back April 7 for its 14th annual sale, once again making top Western, wildlife and sporting art available to bidders. With the tremendous success of the Leanin’ Tree sale, the auction partners—Brad Richardson, Jack Morris and Michael Frost—are feeling a renewed sense of momentum coming into another sale.
“The success of Leanin’ Tree was wonderful. Not only did we sell 100 percent, we sold more than $7.5 million when we had hoped to [sell] about $5 million. It far exceeded expectations and it really is leading us into the April sale,” Richardson says. “We’re hoping that the interest and the sale results are a good sign of things to come for the market and the items we’re bringing to the auction block.”
The April sale will feature nearly 400 works spread across two sessions, the first of which will have 128 no-reserve lots. The second session, where many of the auction blockbusters are likely to appear, will feature top works from some of the biggest names in Western art. The lots are carefully curated by the three partners. “Michael and Brad and I have conference calls and we look at every single piece we’re considering. These calls typically last two or three hours, but as we get down to the sale, they can last as long as five hours,” Morris says. “We’re selective with the work because we want the quality to be as high as possible.” 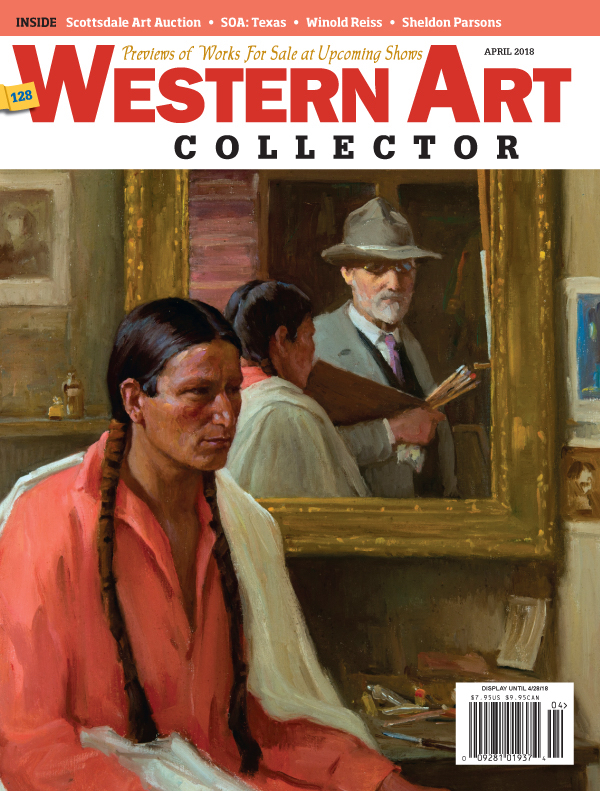 Important works from some of the biggest names in Western art will be available to bidders on April 8 in Scottsdale, Arizona. More than 300 lots will come to market, including multiple items from artists such as Frederic Remington, Kenneth Riley, Ed Mell, Eanger Irving Couse, Bob Kuhn, Gerard Curtis Delano, Joseph Henry Sharp and others. Any one Remington bronze is noteworthy, but the sale will feature two of his most iconic sculptures—Broncho Buster and The Rattlesnake. That theme repeats throughout the sale: Mell’s works include a more traditional landscape as well as a highly abstracted desert scene, Couse has an indoor scene that he was known for as well as an impressive outdoor scene, and both Delano and Riley have an astounding collection of work available that includes multiple pieces across various sizes and mediums. The Scottsdale Art Auction hosts a landmark event this month, present-ing two full auctions back to back. In addition to its renowned annual fine-art auction, this year it brings 114 lots to the block from acclaimed sculptor Glenna Goodacre’s private collection. Auction partner Jack A. Morris Jr., chairman of Morris & Whiteside Auctions, joins Leg-acy Gallery’s Brad Richardson and J.N. Bartfield Gallery’s Michael Frost in pre-senting both sales. Morris says that af-ter deciding to retire, Goodacre donated her personal studio equipment and art library to the New Mexico School for the Arts. She then destroyed all of her molds to give collectors assurance against any spurious castings. Finally, Morris says, she entrusted her own collection of bronzes (some of which are unique castings and artist’s proofs), drawings, paintings, and preliminary documents to the Scottsdale Art Auction, which presents a sale of the items at 5:30 p.m. on Thursday, April 6. On April 2, the Scottsdale Art Auction will bring to bidders an impressive array of artworks ranging from thrilling cowboy imagery to tranquil scenes of Native American life in Taos, New Mexico. The sale will attempt to top last year’s sales total of $13.7 million, its second best total in the history of the auction. At last year’s Scottsdale Art Auction, Kyle Polzin’s 74-inch-tall Mystic Warrior, a detailed still life of a Native American headdress, was expected to sell between $30,000 and $40,000.

Bidding climbed and hit the upper estimate early, and then crept higher and higher as a silent anticipation fell over the watching audience, a silence only broken with gasps as each new bid was called by the auctioneer, and then applause when Mystic Warrior hammered at $287,500, a world record for Polzin…